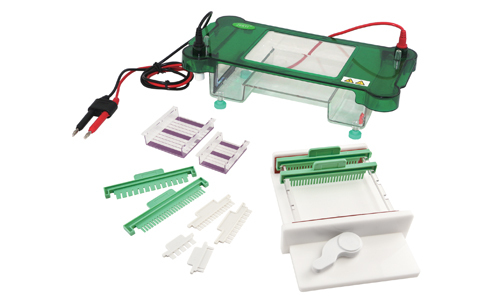 The electrophoresis chamber is the device where the sample is introduced for said process; and where the electromagnetic field that is formed in the electrophoresis process is created, said field takes place within a buffer solution in which the gel is submerged; the high concentration of electrolytes makes the transition of electric current possible. The principle of electrophoresis consists in the migration of the molecules through the gel generated by the electromagnetic field according to the molecular weight and size. This gel has pores that act like a strainer, causing small molecules to move faster than large molecules. In the chamber there are two poles that connect to the power source.

The importance of electrophoresis in many aspects is remarkable, but especially in the area of medicine. Since it is useful to compare samples of a healthy individual with those of a sick patient, allowing identifying nucleic acids of infectious agents; opening the way to the diagnosis of various diseases, and thus being able to treat the individual with the condition with the correct medication.

At Kalstein we are MANUFACTURERS and we offer electrophoresis systems of the highest quality and at the best PRICE on the market. Visit us on our website, in the Products section.

previousHow does a spectrophotometer work?