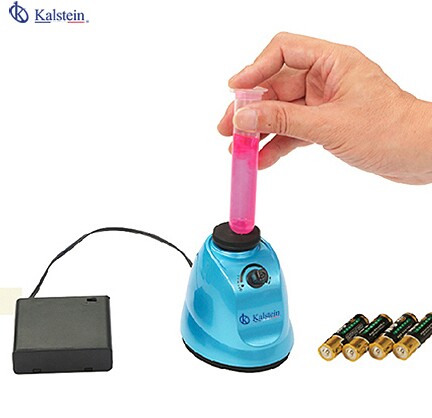 A vortex shaker is a simple device commonly used in laboratories to mix small vials of liquid. It consists of an electric motor with a vertically oriented drive shaft attached to a slightly mounted recessed rubber part.

As the engine is running, the rubber piece swings rapidly in a circular motion. When a test tube or other suitable container is pressed into the rubber cup, the movement is transmitted into the liquid and a vortex is created. Most vortex mixers are designed in 2- or 4-plate formats, have variable speed settings between 100 and 3,200 rpm, and can be adjusted to run continuously or to run only when downward pressure is applied to the rubber part.

This equipment is ideal for intermittent shaking work using tubes, erlenmeyer flasks, beakers, flasks, etc. being able to shake several tubes at the same time. It is not at all limited to the maximum size of the tube or container to be used, much depends on the technique, the shape of the container, the viscosity of the content and the amount of the liquid.

How does this team work?

It consists of an electric motor with the drive shaft oriented vertically and connected to a cup-shaped piece of rubber mounted slightly off-center. The rubber part motor oscillates rapidly in a circular motion. When a test tube or other suitable container is pressed into the rubber cup (or its edge touched), the movement is transmitted to the liquid inside and a vortex is created. Most vortex mixers have a variable speed setting and can be set to run continuously, or to run only when downward pressure is applied to the rubber part.

It is an ideal instrument for gently mixing and forceful resuspension of cells and components of chemical and biological liquids in tubes using an eccentric mechanism. They generally have two modes of operation.

When did vortexes begin to be used?

What considerations should you take into account when using this equipment?

At Kalstein we are MANUFACTURERS specialists in laboratory equipment, so we offer you new vortexes at the best PRICES. That is why we invite you to take a look at the Products menu.