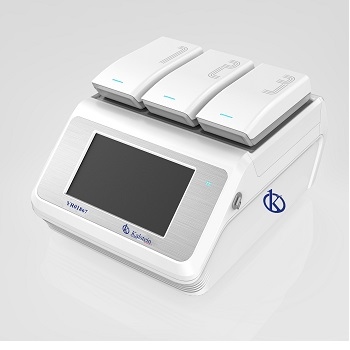 A thermal cycler is a laboratory equipment that allows to carry out the polymerase chain reaction (PCR) efficiently and quickly, by means of the automatic and cyclical realization of the temperature changes that are required for the amplification of a chain. deoxyribonucleic acid (DNA), from a thermostable enzyme. PCR enables a small number of DNA molecules to be amplified many times, exponentially.

The protocol of this technique is based on synthesizing a DNA fragment many times using a polymerase enzyme that can work at very high temperatures, since it comes from the Thermus aquaticus bacteria that lives at high temperatures (79 ° C to 85 ° C), known as taq polymerase.

When we do a PCR reaction we simulate what happens inside the cell when DNA is synthesized and all the necessary ingredients to do it are mixed in the tube: polymerase, the DNA of the organism that we want to study, oligonucleotides (primers, initiators, primers) necessary for the transcription to start, dinucleotides (dNTPs), and the conditions for the enzyme to work properly (certain pH, certain amounts of magnesium in the form of MgCl2, KCl, and other salts or reagents may be needed, depending on each polymerase). This technique has many different applications and has become a very important tool in molecular biology; Its applications range from population genetics, molecular and genomic evolution to forensic medicine.

How does the PCR technique work?

If we already have the tubes with everything necessary for the synthesis of the fragment that interests us to be carried out (taq polymerase, dinucleotides, DNA, water, buffer with magnesium and other salts, and oligonucleotides). The next step is to put the tubes in the thermal cycler, which basically serves to heat or cool them to very precise temperatures.

How is it that the DNA fragment that we want is amplified?

The thermal cycler heats or cools the tubes to three different temperatures, which are repeated over and over again (known as reaction cycles), the first is at 95 ° C (denaturation) during which the double strands of DNA are opened or denatured, remaining in the form of simple chains; After the thermal cycler adjusts the temperature in an interval between 40 ° C and 60 ° C (alignment), at this temperature the hydrogen bonds between the oligonucleotides and the DNA are constantly formed and broken, and those more stable bonds (those that are complementary) will last longer, leaving the oligonucleotides “aligned” forming a small double-stranded region. The polymerase binds to this little piece of double-stranded DNA).

The polymerase binds to this small piece of double-stranded DNA and begins to copy in the 5 ‘to 3’ direction; By adding a few more bases, the hydrogen bonds that form between the bases further stabilize the binding and the oligonucleotide remains at this site for the next step. Afterwards, the temperature rises to 72 ° C (a step known as extension), since 72 ° C is the temperature at which the polymerase reaches its maximum activity, and the synthesis of the DNA fragments continues from the oligonucleotides that they had already lined up.

In the first cycle, with these three temperatures, the first fragments will be formed from the genomic DNA. Then the three temperatures are repeated once more, but in this second cycle, the oligonucleotides, in addition to binding to the DNA that we put at the beginning, will also bind to the newly synthesized fragments of the first cycle, therefore, in this second step the polymerase will synthesize two long fragments copied directly from DNA and two fragments of the expected size, which is the size between the two oligonucleotides that we have used. In this way, with each cycle, the number of fragments of the size we want will increase.

previousWhat is a BOD incubator?

nextWhat is a laboratory magnetic stirrer?