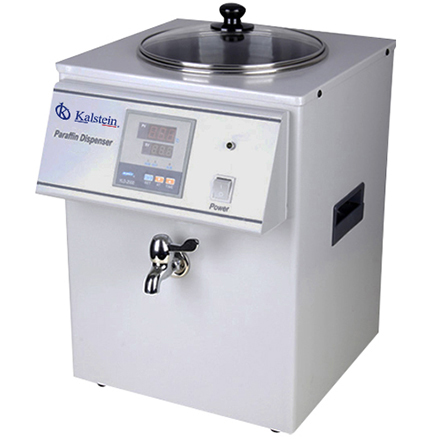 For the inclusion of histological samples to be observed with the optical microscope, paraffin, and to a lesser extent celoidin, is used as a means of inclusion.

Paraffin is a waxy-looking substance that is formed by mixtures of saturated hydrocarbons. At room temperature it is solid and its melting point can vary between 40 °C and 70 °C depending on the composition of the hydrocarbon mixture. Thus, harder paraffins at room temperature have a higher melting point, while softer ones a lower one. A higher hardness is recommended to include harder samples. The most used paraffins have a melting point around 60 °C. The characteristics of paraffins can be modified by adding substances to vary their hardness, viscosity, fragility, etc.

Paraffin is not miscible with water

While all tissues are mainly formed by water. In addition, most fixatives are aqueous solutions. This implies that in order for the liquid paraffin to completely penetrate the tissue, the water must be replaced by an organic solvent. This is achieved by dehydration of the tissue in alcohols, usually ethanol. Dehydration should be complete because otherwise it will affect the subsequent infiltration of the paraffin. Subsequently, the tissue is transferred to a liquid that is miscible with both 100° alcohol and paraffin, called an intermediate substance, such as benzene, xylene, toluene or propylene oxide, among others. These substances are normally lightening so checking the translucency of the piece we can make sure the penetration of the intermediate substance in the tissue. The incubation time of the piece in some of these intermediate liquids such as toluene or xylene should not be excessive since these substances harden the piece and create problems when making the sections.

Finally, the previously liquefied paraffin fabric is passed in an oven regulated to the appropriate temperature for said type of paraffin. Three steps are taken per liquid paraffin to favor a complete replacement of the intermediate liquid with the paraffin. The duration of these steps depends on how volatile the intermediate liquid is and how large our piece is. The greater the less volatile the intermediate liquid is or the larger the tissue sample. Keep in mind that excessive paraffin time can harden the tissue. However, the effects of poor infiltration may be more damaging than maintaining liquid paraffin samples for a long time. After complete embedding of the sample, liquid paraffin is poured into a mold, the sample is introduced and placed according to the desired cutting orientation and allowed to solidify at room temperature.

Is the equipment used to include the paraffin sample. In this process, the objective is to place the different tissue samples in metal molds filling them with liquid paraffin at a temperature of 55-60 °C and then they are placed in a refrigerated chamber at -4 °C, until the paraffin hardens, ready to get to receive the cuts.

In the histological routine two types of paraffins are used: Soft Paraffin, whose melting point is between 42º and 46 ºC, is used during pre-impregnation with the purpose that the tissues begin to infiltrate quickly with this paraffin, due to which has lower viscosity. Subsequently, the samples are immersed in a Hard Paraffin bath (melting point: 56º – 58 ºC), whose degree of hardness is greater and facilitates microtome sectioning. During inclusion in paraffin, it should be remembered that the face of the specimen to be observed under a microscope must make contact with the bottom of the mold.

In Kalstein we have paraffin dispensers at your disposal that facilitate the work in the pathology laboratory. We invite you to consult the available equipment HERE

previousFreezer use in the laboratory

nextLearning about the maintenance and cleaning of your stethoscope